10 years of the FSO – The Official Statistics

As the 1 October, 2016 marked the 10th anniversary of the Regulatory Reform (Fire Safety) Order 2005 (FSO)coming into force, it occurred to me that now would be a good time to examine the data collated by the government in relation to the application and enforcement of the Order.
Unfortunately, the government (previously the CLG now the Home Office) only started collating data in relation to FSO enforcement in March 2009. Statistics detailing audits, inspections, prosecutions and the issuing of prohibition and enforcement notices are published in September each year in respect of the preceding year ending 31 March. The statistics in relation to the year ending 31 March, 2016 have now been reduced. (see Links Page).
Nevertheless, the information recorded between April 2009 and March 2015 makes for interesting reading. During that time, 372 convictions have been obtained in England and Wales under the FSO. (I was involved in 23 prosecutions between 1 October, 2006 and 31st of March 2009; and I have been involved in 38 prosecutions since March 2015, so, as there have been at least 433 prosecutions since 1 October, 2006, I would estimate that there have been approximately 500 convictions in total). The figures for 2015-2016 now only seem to show the number of prosecutions (99) and not convictions, with no detail on which Articles were charged.
I last examined these figures in September 2013, (A Survey of 100 Prosecutions under the FSO) and at that time 35% of all prosecutions related to living accommodation. Based upon the current figures 124 prosecutions have related to houses in multiple occupation; purpose-built flats; hostels; houses converted to flats and other sleeping accommodation. This means that exactly 1/3 of all prosecutions during the six-year period have involved living accommodation. Approximately 20% of the convictions obtained related to houses in multiple occupation. These figures reaffirm my belief that, despite agreements held between fire services and local Borough Councils in respect of joint investigations and cooperation, predominantly, it is the Fire Safety Order and not The Housing Act that has been used to bring ‘rogue landlords’ to justice.
The figures confirm the types of premises connected to the prosecutions:
Care homes 11
Houses in multiple occupation 73
Purpose-built flats +4 stories 7
Hostels 5
Hotels 39
Houses converted to flats 21
Other sleeping accommodation 18
Licensed premises 65
Schools 5
Shops 80
Factories or warehouses 21
Offices 5
Other premises 22
The figures show that high risk premises where there is sleeping accommodation have been a clear target for prosecutions. Many of my own cases have involved properties with commercial premises on the ground floor and living accommodation above. It is not clear to me from the figures whether such premises would be classed as shops, HMOs or ‘other sleeping accommodation’.
I find it interesting that the data relates to premises and not to responsible persons. For me, this is a hangover from the Fire Precautions Act 1971 (FPA). I still receive files which refer mainly to the address of the premises, rather than the person or company to be prosecuted. Surely it would be advantageous to collate data on the type of persons or companies committing these offences?
And what are responsible persons being convicted of?
There is a significant amount of data captured in relation to the charges or Articles which have led to convictions. This data relates to individual charges rather than a prosecution, which may involve a number of charges on an indictment or summons.
The top 5 FSO Articles which have led to convictions are as follows:-
Article 14 – emergency routes and exits 276
Article 9 – risk assessment 190
Article 8 – duty to take general fire precautions 186
Article 13 – firefighting and fire detection 153
Article 17 – maintenance of premises 123
It is somewhat concerning that the second most enforced article involves the failure to provide a suitable and sufficient risk assessment. This article (taken from the Health and Safety at Work Act 1974) was the most significant change from the previous legislation, the FPA 1971, as it placed the responsibilities for fire safety on those responsible for running and controlling premises. It would appear that many landlords and those in control of premises are still not prepared to pay a professional fire risk assessor or to visit government websites to obtain the guidance necessary to carry out their own risk assessments to the required standard.
In my view, the number of convictions obtained in relation to escape routes shows a distinct lack of education in relation to fire separation, fire protection, fire doors and the need to provide for residents, guests or tenants to get to a place of safety as quickly and as safely as possible.
The enforcement of Article 8 over the period is also interesting. In 2009/10, 17 convictions were obtained under Article 8. This number rises year on year to a figure of 45 in 2014/15. I believe that this is due to the preference of some fire services in charging Article 8 to cover all matters rather than charging the more substantive articles in relation to individual breaches.
Surprisingly, there have only been 8 prosecutions involving article 27-which involves the obstruction of fire officers during the course of their investigation. All 8 of these prosecutions took place between 2009 and 2011. It is surprising because I’ve come across a number of cases where defendants have gone to great lengths to obstruct fire officers, either by refusing to provide requested documentation or even by pretending to be someone else. There is no doubt in my mind that the reason for the lack of prosecutions under this article is that it is a summary only offence to obstruct a fire officer and therefore must be laid before the court within 6 months of the offence being committed.
Another surprise is that only 19 prosecutions related to the lack of training for employees. My experience is that this is only evidenced on rare occasions.
So these are the official statistics. In my next article I will look at the history of the FSO with more consideration of the types of responsible persons who have been prosecuted. 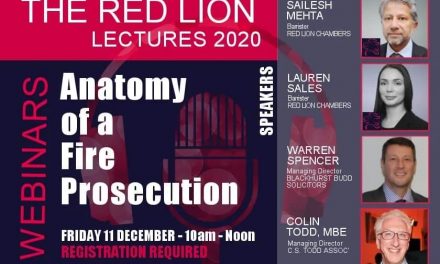 Lancashire Commercial Landlord had ‘Blatent Disregard for his Tenant’s Safety’