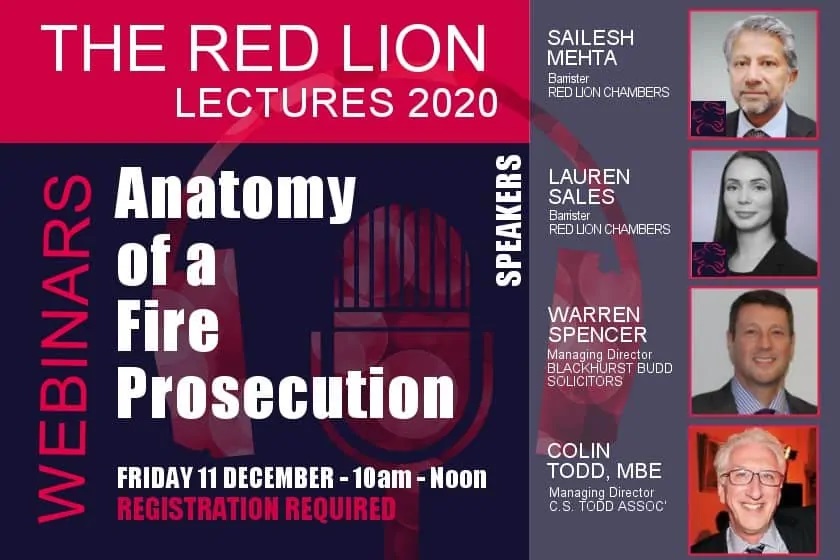 Red Lion Chambers invite you to :
Anatomy of a Fire Prosecution
10 AM – 12 AM Friday, 11th December 2020
Zoom Webinar

This is the first of a series of Webinars exclusively for the Fire Services. The Webinar is essential for those who require an up to date overview of the Prosecution process in fire safety cases. It will provide advice for fire officers who might have to give evidence in Court, investigators, officers in charge of prosecutions and in-house solicitors.

Topics discussed will include:
• evidence gathering and presentation
• obtaining evidence in relation to “the responsible person”
• steps leading up to, and issuing proceedings
• instructing experts
• giving evidence in Court
• the sentencing exercise
• A “worked example” will be used and questions from the audience will be encouraged

Sailesh Mehta is a leading advocate who has defended and prosecuted in some of the most serious and important cases over the last 30 years. His practice ranges from serious and organised crime to high-profile regulatory cases. He sits as a Recorder of the Crown Court.

Sailesh is one of a handful of barristers in the UK who specialises in fire law. He leads the Red Lion Chambers Fire Law Team. He has advised fire brigades across the country on aspects of law and policy, and prosecutes and defends, particularly in fatality cases.

Lauren regularly advises and acts for Fire and Rescue Services, corporations and individuals in respect of the Regulatory Reform (Fire Safety) Order 2005. She has defended and conducted prosecutions in the Crown Court involving serious breaches of the Order by hoteliers, landlords and restauranteurs. As well as involvement in substantive court proceedings, Lauren also acts in appeals of enforcement and prohibition notices, as well as fire safety interviews and written advice in relation to charging decisions.

Warren has conducted over 200 fire safety cases under the Regulatory Reform Fire Safety Order. He has acted and advised for 8 fire and rescue services and involved in provision of legal training for 4 additional fire services.

Warren has 15 years’ experience of prosecuting and defending fire safety cases and is the author of Fire Safety Law – A fire law resources site. Warren provides monthly articles for the Fire Protection Association magazine, Fire and Security Matters website and delivering presentations and seminars at Firex exhibition and Conference for Landlords and Healthcare Fire Officers.

Colin serves on a number of British Standard Committees, is a Board member of the Fire Industry Association (FIA), Chairman of the FIA Fire Risk Assessment Council, Chairman of the IFE Panel that registers fire risk assessors and the author of a number of British Standards Institution (BSI) publications, including PAS 79, the BSI guidance on fire risk assessment. Colin is a Chartered Engineer, a Fellow of the Institution of Fire Engineers, a Fellow of the Institution of Engineering and Technology and a Fellow of the Chartered Association of Building Engineers. For the past several years, he has been voted by his peers as one of the most influential people in fire safety and he was awarded an MBE for his services to fire safety in the 2020 New Year Honours list. 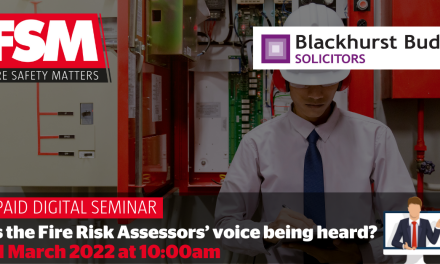 New Webinar: Is the Fire Risk Assessors’ voice being heard?