Is it Time to Review and Amend The Fire Safety Order? 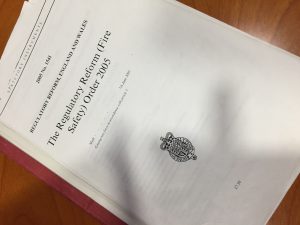 I have defended or prosecuted over 190 cases under the Fire Safety Order since October 2006. I am a higher courts advocate, so I deal with cases before both the Magistrates Court and the Crown Court. For various reasons, (most defendants plead guilty to fire safety charges-so nobody appeals to the Court of Appeal) there is no case law in relation to the interpretation of the Order.
That does not mean that the Order does not require clarification or amendment. Over the last 12 years opposing advocates magistrates court clerks, district judges and Crown court judges have on numerous occasions expressed concerns regarding the drafting of the Order.
Here is a summary of the points/concerns which have been raised with me over the years.

The definition of “domestic premises” and what constitutes a “private dwelling” would benefit from reform. The current definition suggests that the Order cannot apply to private living accommodation or to those responsible for such premises, when clearly the Order can apply. If a tenant living in private accommodation has any control over the safety of his premises, which may affect the safety of other parts of premises (for example, a fire door leading on to the communal areas), then the Order may apply to a limited degree. On the basis that the Fire Safety Order appears to be preferred as the enforcement tool of choice, as opposed to the Housing Act, further clarity in this regard would significantly assist those who enforce.
It is unlikely that the courts will be able to provide much assistance in the interpretation of the Order within the foreseeable future. I’m not aware of any appeals, regarding a point of law in respect of the Order, finding their way to the Court of Appeal. Any reform would have to come through statutory instruments for a revision of the Order (which is easier than with primary legislation). In my view, these areas should be considered for reform as a matter of urgency.

The Responsible Person/Persons with Control – Articles 3 and 5

For me, the most obvious area for reform is in the area of identifying responsible persons under the Order. I have no doubt that it is this aspect of the Order, which causes the most confusion, not only to fire officers, but also to those responsible for the safety of their premises. Dame Judith Hackitt identified this issue in her interim report at para. 1.16:
‘Responsible persons’ under the Regulatory Reform (Fire Safety) Order 2005 are frequently not identified when the building is due to be handed over following construction and therefore people are not aware of their responsibilities and often assume they are for someone else to do.’
Presently, Article 3 deals with the definition of ‘responsible persons’ and Article 5 deals with ‘persons with control’. Whilst I understand that employers should be distinguished from other responsible persons to ensure compliance and consistency with the Health and Safety at Work Act, the combination of Articles 3 (b) (i), and (ii), together with Articles 5 (3) and (4) create confusion and the lack of clarity when establishing those against whom enforcement should be taken. Article 5 (3) imposes the same responsibilities laid out in Article 3 on those with any control over premises (the extent of their control). I cannot see why Article 3 cannot be made much simpler by replacing Article 3 (b) with the contents of Articles 5 (3) and (4).
A reform of this nature would ensure that all those with control of premises would be called responsible persons and the confusing aspect of Article 3 (b) would be removed. Articles 30, 31 and 32 treat those with control premises in exactly the same way as they treats responsible persons so no further amendments would be required in respect of enforcement issues.

Presently, Article 8 is used for 2 separate purposes. Due to the lack of a substantive Article in relation to fire separation and compartmentation within buildings, Article 8 and general fire precautions (Article 4(a)) is used in a convoluted way to deal with the lack of fire separation.
Article 8 relates to general fire precautions at 8(a) in relation to the safety of employees and 8(b) in relation to none employees. Many companies now, in particular with premises such as hotels and nursing homes are setting up a corporate structure where the employer is an administrative company liable only for the payment of wages with other management companies responsible for the running of the premises. This means that the employer does not have control over the workplace. This leads to difficulty with enforcing Articles 19 and 21 which refer specifically to the duties of the employer to their employees.

The enforcement of Fire Safety Order deals primarily with “general fire precautions”. The Health and Safety at Work Act deals with ‘process risk’. This leads to a grey area where there is a lack of general housekeeping in relation to premises in relation to combustible materials. (E.g. dust), which is not dealt with but which could be said to no longer be a product of process Risk. In the Bosley explosion there was considerable debate around this particular area. Clarification, or amendment is necessary.

There are considerable concerns regarding the enforcement of Article 27 and the way in which the Order treats those who obstruct fire officers less seriously than those who don’t. In my view, Article 32 (7) should be amended immediately so that more serious sentencing options are open to the court when dealing with those who deliberately obstruct an investigation or fire officers during the course of their duty. Presently, those who obstruct can only be dealt with summarily by Magistrates Court with a limited small fine, and that is provided the fire services involved can put together a prosecution within the tight 6 month timeframe.
More guidance is also needed in relation to the application of Article 27. Fire officers are still confused as to their powers when attempting to gain access to premises of concern, and because the Order is silent in respect of many of those powers, more clarification is required. A power allowing forced entry may be appropriate if RP’s are deliberately placing relevant persons at risk of death or serious injury – or are ignoring Prohibition or Enforcement Notices.

Article 32(3)(b)
The two-year maximum prison sentence needs to be reviewed. It is not in line with the Health and Safety Sentencing Guidelines, which do not apply to fire safety cases. I have dealt with 4 fatality cases where the police have initially been involved, investigating either arson or gross negligence manslaughter. The police have not proceeded with a prosecution any of the cases and it has been left to the fire authorities and their legal representatives to explain to the bereaved families why the sentences are so low.
Taking into account the one third reduction for a guilty plea the maximum sentence is effectively 16 months, even where a fatality has occurred.

These are just some areas which would benefit from reform, but clearly, the final Hackitt report will deal with much wider issues, and any reform to the FSO would have to fit into ‘the Golden Thread’ vision which has been put forward.

200 cases in review: How the FSO has been Breached 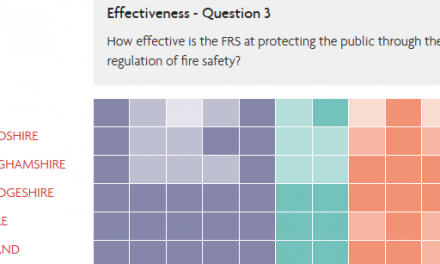 200 Cases in Review – Fire Service Enforcement of the FSO