On the 11th June 2014 Peter Metcalf was sentenced to 18 months imprisonment following conviction after trial of 15 offences under the Fire Safety Order. As far as I am aware that is the longest sentence handed out under this legislation (the maximum is 2 years imprisonment).
So why exactly was the sentence so long? This was a case in which there had not been a fire and nobody had been injured.
Here are my thoughts:-
1. The circumstances of the case

The premises run by Mr Metcalf were the Kimberley Hotel on Blackpool Promenade, quite a large hotel and formerly a prestigious venue for guests and other functions. When contacted by Lancashire Fire & Rescue Service in early March 2013 Mr Metcalf was uncooperative. He even threatened to sue the Fire Service if they gained access to his property.

When access was finally gained after the obtaining of a warrant from Blackpool Borough Council, Mr Metcalf continued to be obstructive. It is significant that the hotel from the outside appeared to unused with boards over the windows and certainly, as far as the Fire Service are concerned, the premises were unoccupied. It was made clear to the Court however that this was a significant factor in that the Fire Service was originally unaware of residents within the premises and their Fire Response Policy was noted accordingly.

An audit and inspection of the premises showed a total disregard for fire safety. Four residents were using the hotel effectively as an HMO. The electrics had been bypassed in such a way that power could only be obtained by sockets on the escape routes and not from within the rooms. There was no working fire alarm or emergency lighting but it was the escape routes that were potentially lethal.

I use the example of one particular tenant to illustrate what he might have had to endure had a fire occurred within the premises. The resident of Room 128, had he become personally aware of the fire by means other than hearing an alarm, had an exit route available immediately outside his room on his right, if he turned right into the corridor. However the door in front of him had been sealed shut with wooden batons from behind the door. He would then have turned around, walked a few yards and turned left to the next nearest available exit but that exit route was blocked by bed frames across the door. He would then have had to travel some distance (in excess of the distance provided by the guidance documents) to the fire escape at the corner of the building. Having travelled down a staircase, which was not fire protected, he would have faced an exit door on the ground floor only yards in front of the bottom of the staircase. However, that final exit door had been chained and padlocked shut. He would then have had to have travelled through the “Ballroom” and into the lobby to gain access to the only openable exit door. However contained in the lobby was an LPG cylinder and roofing materials. That lobby also led to the kitchen which contained inadequate fire separation with no fire door, defective intermittent strips and cold smoke seals.

After finding the case proven the Deputy District Judge in the Magistrates’ Court described the fire safety provision as “chilling” and in a “lethal state” describing a “potential bomb in the “foyer”. On that basis he decided that his sentencing powers in the Magistrates’ Court (fine only) were insufficient and committed the case to the Crown Court for sentence. A list of the offences, which the Court found Metcalf guilty of, are detailed below.

2. The attitude of the Defendant

The Defendant Metcalf described himself as a “free man of the land”. He did not consider himself bound by statutes. A trial he took issue only with the way in which the Borough Council had obtained the entry warrant to the premises. When asked if he wished to mitigate the circumstances in any way before sentence he stated that the residents of the premises were adults and that living there was their choice and if they did not wish to reside in the premises then they could have left at any time. He did not mitigate his case in any way and refused to speak when the Judge asked him to comment.

Had the Defendant pleaded guilty he would have received at least one third off any sentence the Judge was considering imposing. On the basis of the sentence he received it would have meant a reduction of at least 6 months.

The Defendant had previously been convicted for regulatory offences in relation to food hygiene in 2010 and had received a 12 week prison sentence suspended for 18 months. That sentence expired only months before the commission of the fire safety offences. This was clearly an aggravating factor in relation to sentence.

5. The Defendant was unrepresented.

I have no doubt that had he received appropriate legal advice he may not only have pleaded guilty to the charges before the Court but he would also have had somebody offering some form of mitigation in respect of the offences.

Although this case involves a somewhat unusual set of circumstances it nevertheless now provides a sound sentencing precedent for all future fire safety cases which follow. 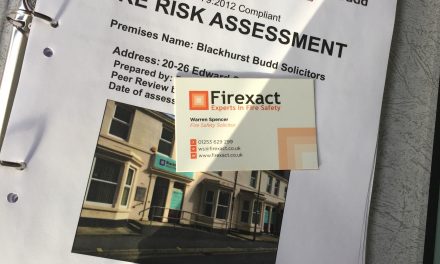